After an early start, we met up with our friends David & Sally in their 1930 Studebaker roadster at 7.00am at the Karaka Service Centre and soon after  headed south for Cambridge, for our coffee stop.   Then as we sailed through each town, we made Taupo at 11.20 for brunch.  A lovely trip so far with the Packard humming with the new overdrive fitted. After catching up with Robbie & Bev in their beautiful Plymouth Woodie, we fuelled up and onto the Napier/Taupo road where we hit ROAD WORKS!!!!!!! and more road works, having to stop for temporary traffic lights at the first set of road works.  It had been raining very slightly but no problem having our hood down while we were driving….different story when we stopped – so up she goes and just in time as it rained quite heavily.  More road works slowed the journey and we eventually arrived in Napier around 2.00pm – yes here at last for another great weekend.

Thursday evening we were treated to a lovely BBQ as part of the Chrysler Club (Packards were the orphan vehicles!), a lovely night with lovely hosts.

Friday morning saw the guys under the bonnets, ‘tweeking’, cleaning, and making minor adjustments, so it was off to the Antique Fair for the girls!    So busy and so much to see there, we had a lot of fun but had to be back at 11am, as we were going to Hastings.   They were having a vintage outdoor sale so we thought we would check it out.    We had  7 vehicles, 3 Packards, a Studebaker, a La Salle, a  Buick, and an Oldsmobile, so we made quite a colourful showing as we parked around the fountain in Hastings.   We soon had crowds of people around the cars, while we had lunch at a lovely café.   Then back to Napier for a relaxing afternoon around town.

Friday evening we donned our gladrags and parked in town by the soundshell.   Between a group of us we set up a table and with nibbles and a glass of champagne, we were set for a lovely evening, ending with us listening to the sounds of the big band, and watching the energetic dancing, over at the sound shell.

Saturday morning dawned a beautiful Napier day and saw us up bright and early to be at Napier Boys High School for morning tea provided for us  by a local school – very yummy.   Here we had a line up of 12 of the 14 Packards –  on the grass with palm trees as a backdrop. They made an impressive sight and it was lovely to see the 3 new additions of Dallas & Sue McNeil’s 1935 120 Convertible Coupe, Brian & Margaret Taylor’s 1946 Clipper, and Theo & Michelle de Leeuw’s 1928 526 Phaeton.  Through the motel owner Mal was asked if he would ‘go live’ to an Auckland radio station at 11.00am on Saturday.  The phone duly rung and he was asked questions relating to the origins of Art Deco, what brings us down every year, etc, etc, this went on for about 15 mins (meanwhile ALL the other vehicles had left for town).   Mal was just finishing up the call when outside the school along comes the steam train blowing a full head of steam, so he holds up the phone to ask if they can hear it…. just then right above us flies the Mustang making that awesome distinctive sound……with it’s Packard Merlin engine!!!  AND THEN the train blows it’s steam whistle!!! Well by this time the radio announcers are just about out of the studio and heading for Napier!!!!!!!  What perfect timing to extol some of the virtues of this weekend.    We arrived in town to line up ready for the lunchtime parade through the centre of town, with around 280 vehicles it made a spectacular sight for the thousands of people lining the streets, on balconies and up at the soundshell area.  We took some passengers in our ‘rumble seat’ and they were blown away with the whole parade. The afternoon was spent lunching, wandering around town, and catching up with people we know from all over the country.

Off into town for Saturday night, where we set up the table again for an evening of friendship and fine dining!   During the evening Mal was chatting some of the Navy boys from the ‘Canterbury’ which was berthed for the weekend.   It turns out that one of our esteemed Packard ‘officers’ was quickly demoted to ‘Petty Officer’ by the real Warrant Officer!    It was during Mal’s conversation that we were invited to tour the ship on Sunday morning – provided we brought along our vehicles. We arrived precisely (Navy timing you know!!) at 11.00am and were given a tour through the ship by Warrant Officer Wigg, up & down wobbly stairs and standing behind the Captain’s seat.

NOTE:  During the 1931 Napier earthquake a ship called the ‘Veronica’ was berthed in Napier and was instrumental in much needed assistance following the devastation.   Little did we know that Sunday, that the 7.3 earthquake would hit Christchurch on Tuesday, and the ‘Canterbury’ would be sent to Christchurch to perform the same role as the ship in 1931.

We headed into town after our ship’s tour to attend the memorial service, which is held each year to commemorate the ‘Veronica’s’ help in 1931.   When this ship was decommissioned, the Navy  donated its bell to Napier City, so the bell is paraded very solemnly into the sound shell area, where it is hung until the end of the day on Sunday.     Before we knew it, it was time to head out to Brian & Margaret Taylor’s place attend our Packard AGM, after which we had a lovely afternoon tea – thanks Margaret.

Sharing a final dinner at a local restaurant, it would sadly soon be time to start packing for the trip home tomorrow.   We had a lovely, but hot, trip, meeting up with others in Taupo, before our final leg home.

Photos of this year's Festival 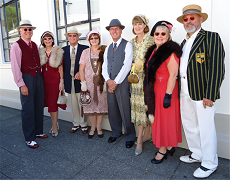