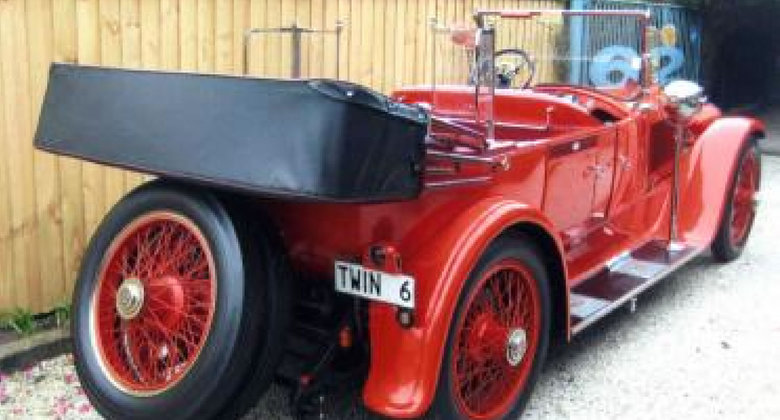 “The first official beach race for New Zealand was held in 1922 and several of the cars would have been from the Veteran era with such names as Chandler, Hudson, Cadillac, Baby Grant Chevrolet, Vauxhall, and Packard featured.

The Packard was a 1918 Twin Six driven by Selwyn Craig, the first Packard to be imported into New Zealand as the official car for Governor General Lord Jellicoe.

The car had been burnt out, something twin sixes were prone to do having a pressurised carburettor hanging between two red-hot exhaust manifolds. Selwyn obtained the remains, built a light racing body, fitted wire wheels and designed an ingenious modification to the gearbox giving the car a much higher top speed.

Mason and Porter an Auckland firm took out the low and reverse gears and made two new gears that reversed the low gear ratio making a very effective overdrive. The car could now do 100mph.

In the race Craig got away to a bad start having no first gear. But by the end of the first lap of twelve and a half miles, he had passed all the field except the Hudson and reached the corner at too high a speed. That combined with the length of the Packard forced him into a double spin. Although he didn't come to a compete stop it did cost him time. But Chandler got into the soft sand and at the second turn the Hudson and the Packard had left the field behind. Another spin from the Packard left the Hudson half a mile ahead, but the Baby Grand was catching up fast. The Hudson still in the lead overheated and started to slow, allowing the Packard to pass, followed by a Cadillac. Craig crossed the finish line doing over 100mph disappearing off down the beach from were he eventually returned to receive the victor’s laurels.

His average speed was 76mph. During the race the oil boiled in the Packard gearbox owing to the heat generated by the high speed of the shafts. The riding mechanic had to hold the lever in gear until it got too hot for his hands and pliers had to be used. This car is now owned by Tom Cloudesley in Christchurch. “

Origin of story unknown but supplied by Tom Cloudesley