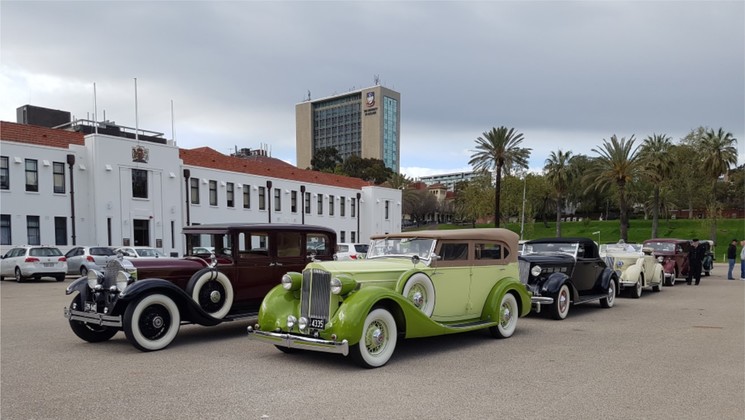 On the 23  of September Glenys and I left for Adelaide to attend the Australian National Packard Rally which was a themed Rally to reenact the service taken by the Webster  Hire Car service of the 1920/1930`s. This service used Packards for their Fleet, they ran from Adelaide to Victor Harbour, and had 3 new 633 Packard 7 passenger limousines and a tourer to start.

Unfortunately we don't have a Packard here so had to travel  via our VW golf.

We arrived  in Adelaide later that afternoon at our apartment for the next few days while relaxing, more Packards arrived at various times through out the evening so got  to meet more members over a drink and food, some were from Tasmania, NSW, Victoria,and SA, all were in good spirits  as we are all the same like minded people,  talked and inspected Packards. Craig McGill joined us there which was good see another member from home.

Unfortunately some didn't make it, one car from NSW an original Limousine from this collection suffered  mechanical issues and had to returned home.

We were expecting to catch up with Brian and Margaret Taylor. On Saturday, Rob Trembath rang me to say  unfortunately Brian couldn't make it ,and we were welcome to drive the clipper that Brian was to drive!  WOW I thought cool, however we were sad for Brian and Margaret.

We went round to Rob`s Saturday arvo and picked the car up a lovely 1955 Clipper sedan in unrestored original condition.

Up early Sunday morning,  polish up time, as we had to be at the starting place for the “Bay to Birdwood" Run, which of course we’d never been too before . It was an eye opener, over 1500 cars, bikes, and trucks of different makes ,models, shapes, styles and years too many to list and name that’s’ for sure. However there were numerous Packards which was great to see, most that were there attended the rally too.

We were one of the front groups to leave the assembly point in all our glory  for a slow run through Adelaide, the route was changed as some roads were damaged from the severe storms the previous week, we had a nice pleasant road run up to Birdwood. In some cases we were passed by motorized push bikes that seemed to be quite numerous and good to see as well.

The leading Packard dropped  out due to fire in a rear wheel brake ,all others arrived safe and well. Glenys had to stop and buy more gear for Art Deco, you know what these ladies are like!! don't want to miss an opportunity to bag a bargain.

The day turned out brilliantly warm as we wandered round chatting to different people we had a great day, later in the afternoon we left Birdwood and drove back to Adelaide following the Trembath`s and were invited to John Lucas Pace to look at his pristine Cadillacs.

Arriving at the Meridian we all either rested or cleaned the cars for the rally the next day and of course chatted and socialized with new friends and acquaintances.

26th  was the start of the Packard rally, a light shower early but soon cleared up.

Our assembly point was not far away at the army barracks parade grounds. It took a while for all to assemble there and most people dressed in the period clothes for the day, which was good to see.  We had a police escort for the first part to the centre of Adelaide  with all the traffic lights set on green for the procession, we thought that was very cool which made all the traffic have to sit and watch us. We then lined up at Victoria Square where we were greeted by the Lord Mayor and welcomed to the city, after his speech he waved us off  as we departed for Victor Harbour.

After leaving the square we headed out of town still with the lights green until we got to the outskirts of the city, then had to follow our instructions which indicated the right way to go, but as you know sometimes we don’t follow them and we

didn’t! We followed a well known member who said he knew which way unfortunately was the wrong way, but we did eventually arrive at the morning tea stop over, had a snack and a group picture of all that could fit in.

We departed for a place called Willunga and had a journey back in time at the Old State court House and Museum with lunch to follow. As there wasn’t much parking space so some had to park outside but all in all was no real issue as we all enjoyed the visit there.

From there we had a nice drive through their countryside down to Victor Harbour where we will stay for 5 days. Everyone stayed at the McCracken country resort. We journeyed to Normanville at a leisurely pace which is on the coast to the Fleurie Peninsula then on round the coast back to Victor Harbour seeing a lot of storm damage on the way so was quite pleased that it was over before we got there.

Wednesday there was a Concours arranged in Victor Harbour, was a nice morning and all went well , some members wandered round the township and the numerous shops. In the  afternoon it started raining, we were watching the storm clouds rolling in, so we packed up and headed back to the resort WOW socialize again.

The evening was a washout weather wise and about 4pm the whole of the State of South Australia was without power.

If you have ever tried to cook and eat with only a few torches in a big resort it’s an amazing experience, dinner was cooked on a BBQ, our phones, internet which we all rely on these days ,all went down, was quite funny really. The Resort did a magnificent job providing for a few 100 guests.

Thursday was organized for a train trip to a place called Goolwa in an old rattler train, mind you was a pleasant trip and the destination was a nice old quaint seaside village, so spent a few hours wandering round the shops and museums till it was time to head back and wait for the bus to take us to the Resort.

Friday was an organized run up to Strathalbyn and lunch, the town is basically in two parts an old and a new, by the time we wandered in and out of nick knack shops and second hand shops the time went fast, all to soon had to head back to Victor Harbour.

This was our last evening together which of course was great with dinner and an auction of bits and pieces with the proceed going to Breast Cancer Research.

Alas all things must come to an end sooner or later and Saturday was dispersion day for all with lots of exchanges of emails and addresses for us new members, goodbyes etc, everyone was heading in different directions.

As we had to return the Clipper we drove back to Rob Trembath’s place and picked up our modern car after having lunch and a cuppa with them and also Gina and Wade, said goodbye again and headed back to Melbourne.

After travelling for a few hours it was getting late so we stopped in a little place called Kaniva for some tea, believe it or not we noticed a Packard parked in front t of the Hotel, so Glenys rang them up to see where they were staying, since we hadn’t booked anything. They arranged accommodation at their motel and we discovered there were 8 other members there as well, which was nice to catch up with them again.

After a group breakfast we all headed off, some stopped at Horsham for lunch however we didn’t and carried on to visit some cousins.

We had a very enjoyable trip and with a great bunch of people always makes for a great time.

Thanks to Rob and Margaret Trembath for the loan of their Clipper which was pleasant to drive and appreciate their friendship and help along the way, also for organizing a Great Rally. 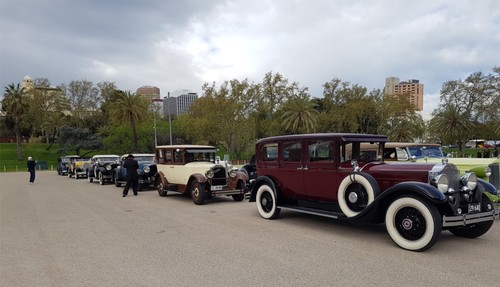